Laura Williams led a book club session on the Society of Genes:

Prof. Elof Axel Carlson reviews the Society of Genes: “It is a book that I hope will find its way into undergraduate courses.” 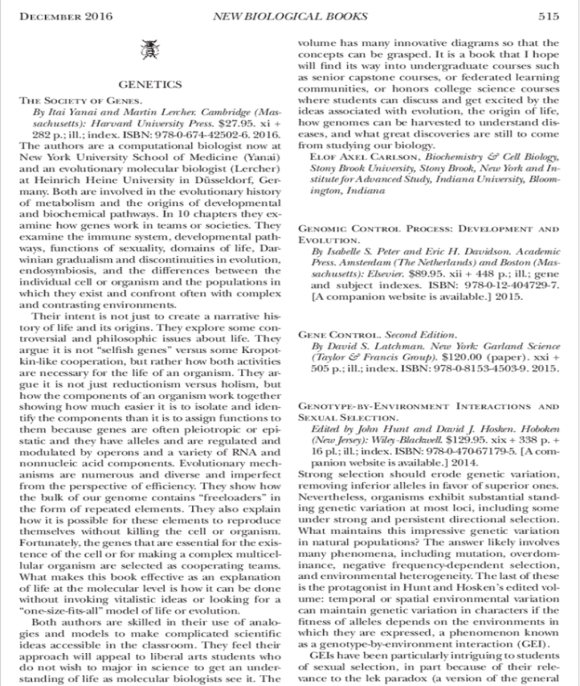 “Lercher and Yanai went to great lengths to pack our current knowledge about genes into a wrapping of prose that is, as far as the aspect of evolutionary theory is concerned, at the level of Dawkins, and the same time comes across stylistically as a popular version of the visionary Dawkins.”

“With their genetical excursions and their – fortunately often graphically illustrated – molecular depth of thought, Lercher and Yanai present one of the most vivid text book for the often abstract and far too complex life sciences.”
“The book demonstrates: you don’t need to be an expert to understand the molecular biological upheaval of our time.”

On a lazy Saturday afternoon, with a latte in hand, I took a walk to my favorite bookstore, thinking that, for a change, I would pick a novel and not a science book. After an hour wandering around the store, I made my choice—The Man in the High Castle by Philip K. Dick. I’d just finished the first season of the TV series, and I was so confused by the show that I figured the book would help me understand what was going on.

I was about to leave, and while I was waiting at the counter, I made the “mistake” of picking up a book that was right in front of me: The Society of Genes. On the back of the book, renowned scientists Michael Levitt and Eric Lander described the book as “punchy” and “thought-provoking.” A “must read.”

How could I resist?

Is The Society of Genes an antithesis, a complement, or an extension to The Selfish Gene, written 40 years ago by Richard Dawkins? Perhaps a little of all three. Dawkins built upon George C. Williams’s theory that our genome is made of genes that solely act for their own survival. Instead, Itai Yanai and Martin Lercher, authors of The Society of Genes and talented system biologists, tell us that our genome is made of a society of genes that, like human societies, is composed of members that form alliances and rivalries. Diving into cancer, immunology, sexual reproduction, and population genetics, Yanai and Lercher tell us how genes interact, collaborate, and battle within our genome.

A first example of genes’ collaboration introduced by Yanai and Lercher is that of cancer-driven mutations. By now, you might have heard about the famous Douglas Hanahan and Robert A. Weinberg review titled “The hallmarks of cancer.” First published in Cell in 2000, the authors revisited their original review 11 years later with “Hallmarks of cancer: the next generation.” Cancer starts when a gene X in our genome acquires a mutation that makes normal cells go crazy—cancer cells divide faster than normal cells and grow even if they’re not supposed to.

Fortunately, our bodies have developed safeguards that protect us from developing cancer after acquiring a single pro-cancerous mutation. While Hanahan and Weinberg described eight ways in which mutations override the body’s safeguards against uncontrolled cell growth, Yanai and Lercher explain to us that genes carrying these mutations “help” each other—cells carrying the first pro-cancerous mutation divide faster, descendants become abundant enough for a new mutation to occur, and so on.

The book is filled with smart and, as Levitt says, “punchy” examples unveiling how genes collaborate or oppose each other. Cancer is by far the easiest one of these to understand, but by opening this book, you’ll also learn about other examples.

One of these is the Clinton Paradox—in 1999, Eric Lander gave a talk at the White House Millennium Lectures in which he explained that the genome of two individuals is 99.9% identical. President Bill Clinton wondered how a 0.1% difference could be responsible for so many wars. But Lander reminds us that 0.1% still represents 6 million letters (our genome being 6 billion letters long). Six million differences is not such a small number and might “justify” some destructive behaviors.

You’ll learn about the “chuman” (half chimpanzee, half human) that people once believed existed. But, as Yanai and Lercher explain, “Genes can mingle between themselves but not with the society of other species.” And you will also learn that, if you’re lactose intolerant, it’s simply because you have an allele that is out of style; indeed, lactose intolerance was considered the natural state of health for thousands of years.

The authors’ comparison between the human brain and the toothbrush company Colgate is very funny. What makes the human brain bigger and smarter than other species’ brains is not that our genome has more genes but simply that some of our genes, found in any other species, are interconnecting with each other in a different way. But what, you might ask, about Colgate? Well, an urban legend says that, years ago, the company was going bankrupt, but that enlarging the hole delivering the toothpaste was enough to save it—the toothpaste didn’t change, but people started using more of it. This is the same idea as in the human brain: the genes are the same, but the way they’re used is different.

And last but not least, let me finish with an example that might amuse feminists: the Y chromosome that distinguishes males from females might soon disappear—yes, the Y chromosome is becoming useless!

Obviously, I don’t do justice to the book with these few examples, and I’ve picked those that I am hoping will push you into opening the book, but believe me, you’ll be surprised by the number of times you’ll stop reading to ask yourself, “Wow, really?” The metaphors used by the authors to depict the society of genes are intelligent, timely, and amusing. This is a book I’m keeping on my coffee table to dig into from time to time, re-read some passages, and look into its humorous illustrations.

The Man in the High Castle was an excellent choice, too, by the way.

“For many people, professional biologists and laymen alike, The Selfish Gene [1] changed the way they thought about evolution. In the preface of their very lucid book The Society of Genes, authors Itai Yanai and Martin Lercher attribute their career shift to biology, from computer science and physics respectively, to Dawkins’s writing. Forty years on, Yanai and Lercher set out to provide an updated version of the argument that inspired them so much.”  J. Arvid Ågren, The Social Life of the Genome

“clearly, if not beautifully, written, and remarkably concise… we need books like this.”